skip to main | skip to sidebar

Sunday, July 15th, saw the launch of my friend Bhuchung D Sonam’s new book Yak Horns: Notes on Contemporary Tibetan Writing, Music, Film & Politics at Jimmy’s Italian Kitchen in the center of McLeod Ganj. There was a reading also, and a few days before the launch, I got a call from Bhuchung and Tsundue inviting me to read, which I was tremendously joyful about. It was going to be BDS, Tsundue, Tsering Wangmo Dhompa and me—It was a luminous triangle and I didn’t really fit but BDS shoved me in, and I was excited and grateful.
The day of, I was on Facebook and saw a poster for the event—nicely designed with the beautiful book jacket and wait, what’s this—reading and discussion? Whaa? I called BDS and Tsundue in a consuming panic and they were both so casual and calm about it: “It’s a completely informal discussion, nothing to worry about, it’s just talking” and I was thinking, yeah nothing to worry about for you guys because you are constantly on stage and giving interviews and used to talking and thinking on cue but I have to know what I am thinking about beforehand because I don’t know what I am thinking until I am thinking it, privately, not publicly!
But the event, moderated by Dechen Pemba of High Peaks Pure Earth, actually went really well—the organization, seemingly on the fly, fell into place seamlessly (there was even a poppy seed cake to welcome Yak Horns into the world). The sound needed a bit of tweaking in the beginning, but that was eventually fixed. And there was a full house crowd, attesting to Bhuchung’s popularity in this town and possibly also the fact that there’s a ready population of the young and the restless in Dharamsala, supplemented by the seeking tourist, always on the lookout for a new gathering, a new restaurant, a new contact, a new angle, a new relationship. 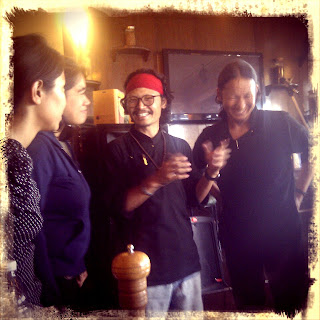 Photo: Kunsang Kelden                                                                           Bhuchung D Sonam at far right
Bhuchung explained that he called the book Yak Horns because when he was growing up in Tibet (and what does that feel like, starting a sentence with those words-when I was growing up in Tibet…) parents gave their kids cut-off yak horns to suck on as “jibdo”, so a yak horn is something that is a very familiar and intimate reminder of home. He said he wrote this collection for two reasons: to provide the Tibetan voice which is often missing or muted, compared to the other non-Tibetan voices pronouncing judgement; and to have a bridge between the community at home and in the diaspora.
I have been picking at the book but haven’t yet had the time to really sit down with it, but it has got a gorgeous cover and just looks beautiful, and I was hooked with the opening piece “Exile is a Lonely Pen”, an essay on exile and writing.. The book is primarily a collection of criticism-- criticism being the one really important thing that’s been almost entirely lacking in our modern literature. Has anything been created until it’s been reviewed? So the talented Bhuchung D Sonam is doing Tibetans a great service, and as a friend as well as a fan, it’s great to see BDS the critic as well as BDS the writer get official between the covers.
Posted by Jhutok at 3:04 PM

Email ThisBlogThis!Share to TwitterShare to FacebookShare to Pinterest
Labels: art and literature

Jhutok
A Tibetan American in New York via Boston and Dharamsala